Last week Jeff and I visited Alinea restaurant in Chicago for our 15th anniversary. It had been a bucket list item for a while and we figured this was just the opportunity to drop $500 on dinner that we needed. The restaurant, which was conceived of by acclaimed chef Grant Achatz and Nick Kokonas, is best described as what you’d expect a gourmet restaurant to look like and be like in a Lewis Carroll version of Through the Culinary Looking Glass. The design of the building and of the service wear is sleek, the servers and staff elegantly dressed, the food nothing short of theatrical.

The meal consisted of 15 courses of whimsical, inspired food that was more than just something to eat, but rather something to be experienced. I was skeptical of the molecular gastronomy aspect of the food here because I have on several occasions been disappointed by the level of flavor in comparison to the complexity of a dish but there was no lack of flavor here. I asked the server what Alinea means and he explained that it was the symbol for the beginning of a paragraph. The idea behind naming the restaurant as such being that each course was the beginning of something new. The napkins were plain white with the symbol of Alinea embroidered on them, a constant reminder that we were experiencing things that are novel and genius. 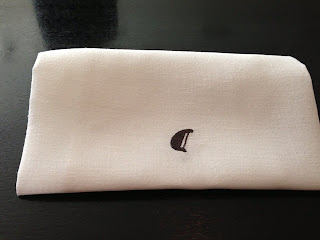 We arrived a little early for our reservation and when we got to the building we were a bit unsure that we had gotten to the correct location. The building is completely nondescript. No sign, nothing to indicate that inside was a 5 star restaurant. I suspect this is intentional as you have to have a reservation to dine here and they wouldn’t want walk ins. 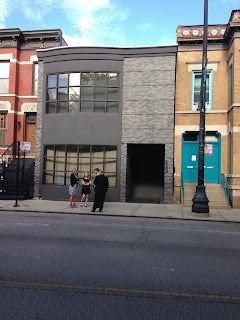 As if right on cue, the doors opened at 5:30pm. When we entered, this is what we saw. 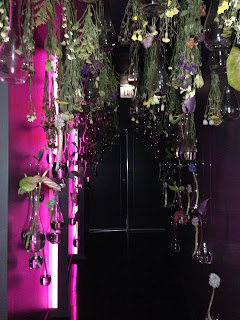 The vases were filled with dried herbs of various kinds creating a wonderful aroma as you walk in. The lighting and mood is immediately set and you know you are in for something highly unusual.
As you enter the kitchen is immediately to the right. They encourage you to look in, say hi and take photos. 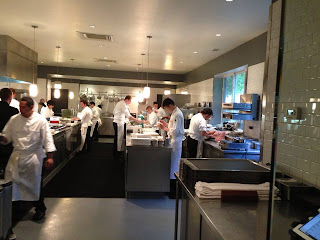 A very sizeable staff in the kitchen considering they serve only about 80 people a night a 15 course taster menu. That being said, the menu is quite complicated and involves a lot of intricate detail. 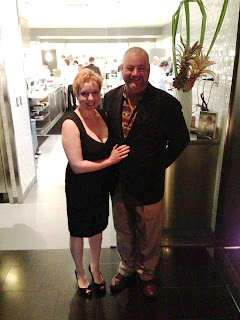 Once we headed up to our table we were greeted by a sommelier, head waiter and additional wait staff numbering about 5 per room of 6 tables. They not only replaced our utensils after each course, they also wiped the table clean between courses. In watching the staff handle several tables at a time, including a couple of tables with dietary restrictions, it became evident that this is a highly trained staff that is dancing a highly choreographed piece keeping everything straight and the timing was impeccable. 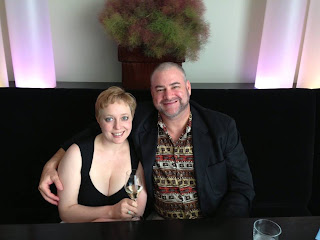 Our menu was as follows: The courses appear in order. The circles indicate the size of the item and the situation right or left the sweetness. Those on the left being the more savory and those on the right the sweet. 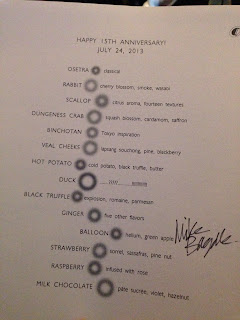 Note they brought this to us at the end of the meal. It had on the top “Happy 15th Anniversary” and the date and they had the chef sign it. I thought that was tremendously classy.
One of the things I thought was an interesting touch was that the utensils were placed on a little pillow. I presume to both protect the utensils and the table. 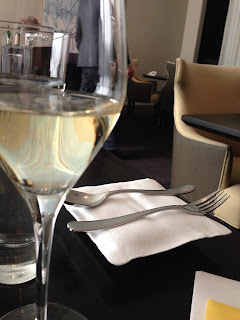 Our first course was a little amuse bouche of Osetra Caviar on a little spoon with creme fraiche. The perfect little bite to stimulate your senses and wake up your palate. Slightly salty and slightly sweet with a hint of creamy. The next course was rabbit with cherry blossoms, smoke and wasabi. The radish and wasabi added heat, cherry blossoms sweetness and the rabbit was almost like bacon bits. Lots of different textures dancing around in your mouth. 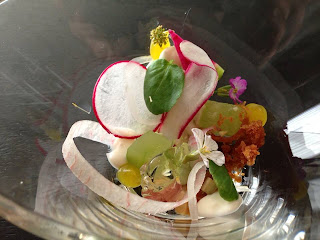 The third course began the theatrical nature of the meal. Entitled Scallop: Citrus Aroma, Fourteen Texture, the dish arrived in a cauldron bubbling with dry ice. You couldn’t even see the what was in there without blowing the dry ice out of the way. 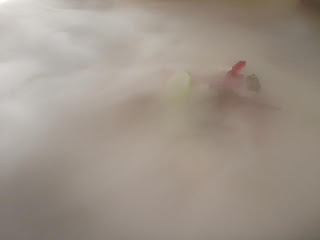 What was revealed was a shell filled with scallop and seaweed around the shell, covering the dry ice. Incredibly dramatic. 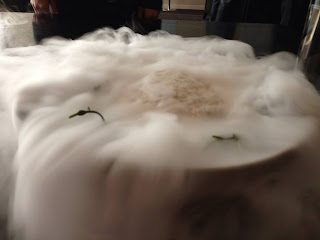 The contrasting textures, flavors and aromas against the creamy scallop were a triumph. 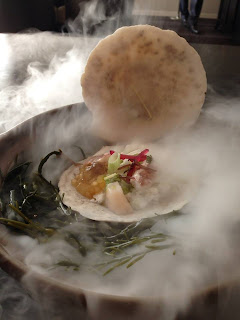 Next, Dungeness crab with squash blossom, cardamom and saffron. This one came to the table with the intense floral aroma of saffron. The flavors of the sweet crab paired with the exotic Indian nuance of the cardamom were fantastic and the crispy squash blossom a great seasonal garnish. Again, the play of textures was super, with creamy, crunchy and chewy. 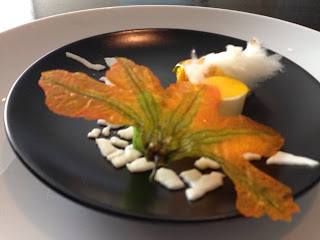 The drama continued with the following course which arrived on fire. A Japanese log was placed on slate and coal lit with fire. Four little bites were perched on the log and served with chopsticks. The first a bite of crispy pork belly, next a delicious morsel of wagyu beef, then a seared sea bass and finally a crunchy fish head (which was Jeff’s least favorite item). I enjoyed them all but we both agreed the wagyu beef was amazing. 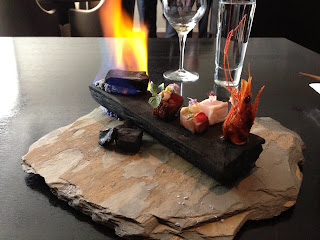 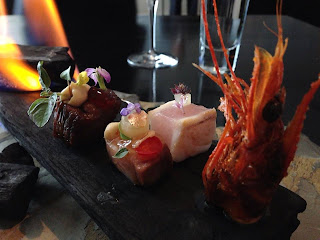 The sixth course was the veal cheeks with lapsang souchong, pine and blackberry. This one was an olfactory triumph. The second it was brought near you could smell the pine immediately. What we noticed was that all the smells of the evening really put you in a specific time and place. This one was the most distinct though. It also happened to be Jeff’s favorite course. The veal was delectable. 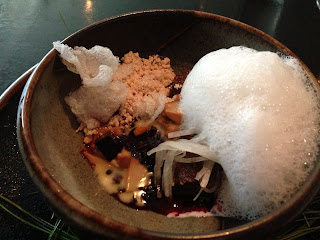 Hot potato cold potato was my least favorite of the courses, not because it wasn’t good, but just because it was the least inventive of the bunch. The service ware itself was genius. You pull the little pin holding the hot potato and when it comes out the hot potato drops into the cold vichyssoise. Then you eat it quickly so you get the contrast in temperature between the two. Fun, delicious, simple. 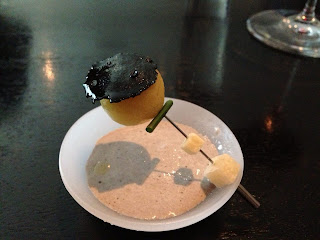 The next course was my favorite. This one will blow your mind. It’s simply called Duck ???????? !!!!!!!!!. The duck was served 5 ways, seared fois gras, pate, breast, confit and some kind of other almost duck salad. Then they serve it with a ton of different little garnishes. The point is that you can mix and match however you like and try different ones on different pieces of duck. It is an interactive experience, delicious and super fun. Like being a kid with a bunch of crayons, only they are edible. Jeff and I had a field day. We tried all of the garnishes. Oh, and the duck jus poured over the duck was delectable as is without any of the garnishes. 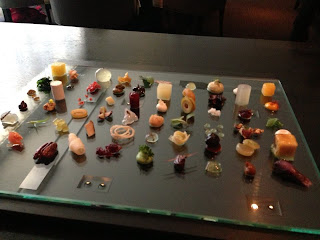 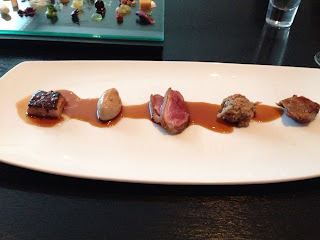 The last of the savory courses was a little ravioli. It arrived on a hollow plate suspended on a spoon. They called it Truffle Explosion and warned us to eat the whole thing in one bite and don’t open your mouth. It was just that. A liquid explosion of pure truffle flavor inside of the delicate ravioli. Oh. My. God. 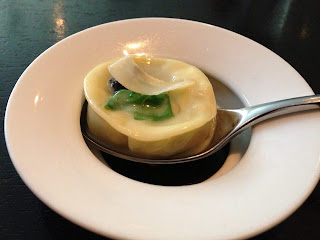 Then a palate cleanser of sorts. This fascinating little contraption which looked like fingers arrived with 5 tiny little bites of ginger with various different flavors from savory to salty to smoky to sweet. The perfect way to clear your palate and move you from savory to sweet. Again, the special service ware throughout the meal was part of the art. Truly amazing. 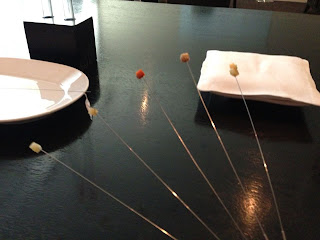 The first of the sweet courses was probably the most amusing, at least for the others in the room who were observing. It is a helium balloon made out of green apple taffy. The helium itself is scented with green apple. They instruct you to kiss the balloon and inhale the helium. Then they want you to talk. Jeff and I immediately started giggling and I must have sounded like Mickey Mouse because the table next to us started roaring. The balloon was sticky and delicious. And they even though of the little touch to bring us warm towels to wash off with afterward so we weren’t sticky for the next course. I tell you, attention to detail was superior here. 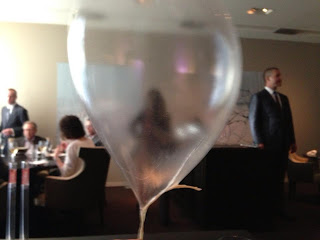 The second of the sweet items was called strawberry with sorrel, sassafras and pine nut. The server called it frozen strawberry granola, which is essentially what it was. Jeff LOVED this one. I got brain freeze, but it was delicious. Not overly sweet and super crunchy. 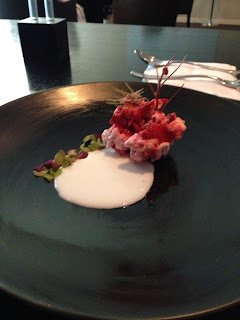 The second to last course was a raspberry fizz. Served in a glass bottle with a glass straw that had rose petal in it. It was fun, fruity, light, frothy. Not revolutionary, but a neat touch. 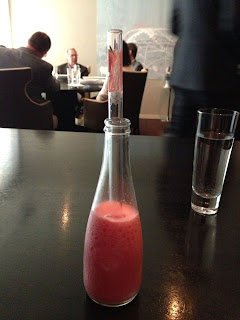 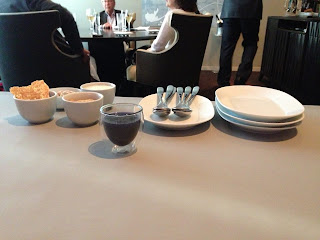 It began with placing a silicone table cloth over the table. Then they brought a bunch of little bowls with all kinds of ingredients to the table. Then one of the chefs came out and proceeded to paint our dessert onto the table. I kid you not. It is truly a work of art. 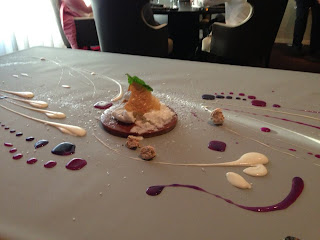 The center is a milk chocolate mousse with a pate sucre crust underneath, creme fraiche, freeze dried hazelnut and the purple a violet puree. It all started liquid and the freezes up. Unbelievable. 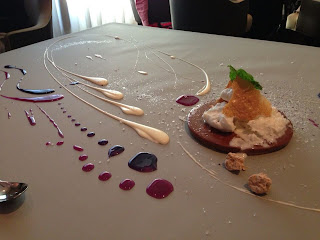 Another view because it is just beautiful. And you just literally eat it off the table. It was a huge serving but we ate it all. 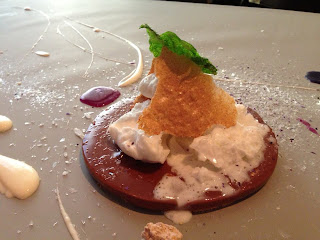 And a close up. Just genius. I still can’t believe it happened.
So that was it. The whole meal took about 3 hours from beginning to end. We didn’t do the full wine pairing but rather a modified pairing which the sommelier graciously orchestrated for us so we didn’t get too tipsy. Did the meal change my life?? No. Was it worth every penny and something I’ll remember forever?? Absolutely. What they do is something only possible in the context of the system they have developed. It isn’t me and what I do as a chef. I can learn from it sure. I can be inspired by it. But I will never do this kind of food. I appreciate molecular gastronomy when it is executed well, especially when the food is as delicious and creative as this was. However, it does not fit my model of fresh, local ingredients prepared in a Mediterranean style. My food is simple, elegant and flavorful above all else, allowing the ingredients to speak for themselves. Sometimes I do like getting theatrical, as I did with my Dr. Seuss menu, but even within that structure, there is nothing chemical about it. It is all fresh food, prepared by me, by hand, no gimmicks. And I do not say this to diminish anything we had at Alinea. It truly was an amazing experience. I’d recommend anyone who loves food, who loves the theater of food, to go at least once. You won’t regret it.