Check Availability
I just returned from a week long trip to Vegas and while there I noticed a trend. Just about every restaurant I went to served a version of a Mozzarella Caprese salad from the more casual spots to higher end places like Valentino’s and Gallagher’s. My friend and I are caprese junkies so we decided to conduct a very professional survey of the array of capreses we found. I won’t lie, we ate them all, but some were indeed superior to others and there are two main factors to that, the quality of the mozzarella and the quality of the tomatoes. It is a very basic salad really and you can jazz it up in various ways with garnishes like pesto and olives, but at its heart it is a showcase for fantastic fresh mozzarella and perfectly sweet, ripe tomatoes. 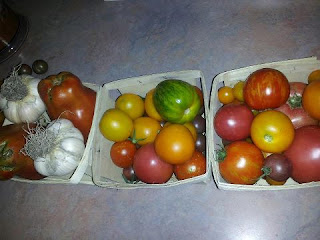 First, fresh tomatoes. This salad really is best in the peak of the summer when you have an array of fresh tomatoes of all kinds and colors. In general I’m not a fan of using simple slicing tomatoes for this salad. They don’t have as much flavor as some of the more exotic heirloom varietals such as green and red zebra. They are also more watery. I like tomatoes that have a meaty quality, not a mushy one. 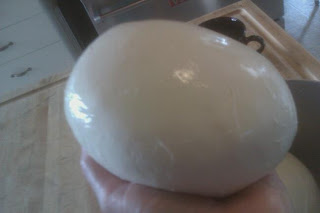 Next, fresh mozzarella. It really isn’t that difficult to make yourself. You simply need good quality milk, preferably organic and preferably not ultra-pasteurized. You can purchase a kit that has salt, citric acid and rennet in tiny tablets from www.cheesemaking.com. It’s fun and the flavor simply cannot be beat. The only hitch in the giddy up is that you cannot do anything else while making cheese. It is time and temperature sensitive and if you don’t pay attention, it won’t work. And the whey left behind from the mozzarella process is super healthy for your furrbabies! 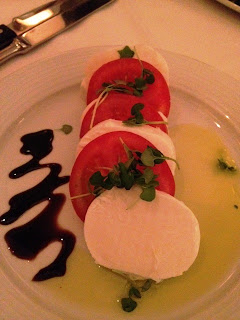 Without naming names, I’ll share photos of the salads we had. This one was actually one of the more basic ones. Store bought mozzarella, pretty unripe tomatoes and the balsamic was a glaze, not a high quality balsamic vinegar or a reduction. The glazes are made with corn syrup which is totally over powering and makes it have a sickeningly sweet flavor. The olive oil, however, was a wonderful, fruity olive oil which was the best we had. And the delicate basil leaves were lovely. 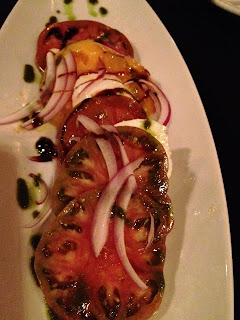 This one was actually one of the better ones as far as the tomatoes were concerned. They were ripe and there were multiple varieties. The mozzarella again was store bought and I didn’t care for all the raw onion on top but considering the rest of the meal we had at that restaurant, this was definitely the highlight. Again, it used a balsamic glaze which I did not like but they made a basil oil instead of fresh basil on top which was quite nice. 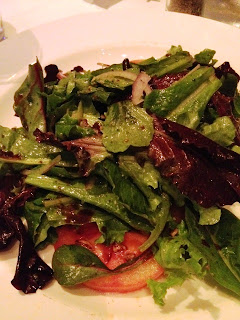 This was my least favorite. The greens on top totally masked the tomato and mozzarella. It was a lovely salad, but not a true caprese. The tomatoes were very under ripe and the mozzarella was just ok. No basil, no balsamic. There is such a thing as too much of a garnish. 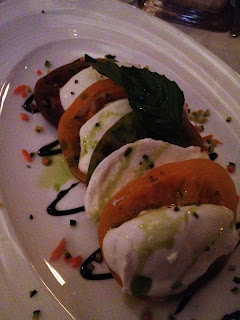 This final one was the best. Ripe tomatoes, fresh burratta mozzarella made in house and it was not overly garnished. Again, they used the glaze but it was wasn’t over powering because it was used sparsely. The olive oil was fruity and they had a delicious sea salt on top that accented the creamy mozzarella beautifully. 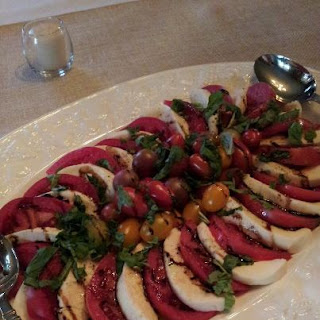 This final photo is of a caprese I made last summer using fresh tomatoes from the farm and fresh basil from our garden. It was delicious, beautiful and took advantage of the delicate fresh mozzarella I made.  And you will notice the balsamic on top was not a syrupy glaze, but rather a delicate drizzle of a reduction I made. Just the way I like it.

2 thoughts on “Not All Caprese Salads Are The Same”