I use a LOT of paprika in my cooking. I am Hungarian and grew up with a grandmother who cooked classic Hungarian fare so that may have something to do with it. It always surprises my cooking class students that paprika has a flavor because they are accustomed to the brown stuff in the Schilling or Mccormick bottles that are scentless and flavorless. Let’s be honest, these companies aren’t exactly sourcing the highest quality spices and their spices often sit on store shelves for far longer than they should. 6 months to a year is about as long as you want your spices to sit around before they begin to lose substantial flavor.

Hungary is the leading producer of paprika which is basically dried and ground peppers of various kinds. It is utilized in the cuisines of many different cultures from Indian to Moroccan to Hungarian. There isn’t just one kind of paprika, but rather a number of different kinds that range from sweet to hot to smoked and not smoked. The grading in Hungary is as follows:

Kulonleges or Unusual
Csiposmentes Csemege which is mild in flavor and can vary in color
Csemegepaprika which tends to be a little stronger flavored
Csipos Csemege, Pikans which is spicy
Rosza which is a lighter color
Edesnemes which is sweet and is the most often exported
Feledes which is a combination of sweet and spicy
Eros which is the strongest flavored

Paprika is also grown in Spain as well as a few other countries in limited quantities. I am a purist though and always buy Hungarian. Good sources include Penzey’s, Spice World and of course, my go to source, Zamourispices.com.

Paprika, and all your dried herbs and spices for that matter, should be kept in a cool, dry place, away from sunlight in an airtight container. This will insure that you do not lose flavor to oxygen or color due to sunlight. Never freeze or refrigerate your spices as the cold will actually mute the flavor and destroy the cellular structure of the spices. And contrary to what you may see in kitchen design stores, keeping your spices in a drawer next to your oven is a terrible idea. It will destroy them.

I use paprika in everything from stews to soups to meats. For best flavor, you should add the spice to the heat and toast it prior to adding any liquid. This will bring out the essential oils from the spices which is where all the flavor is. 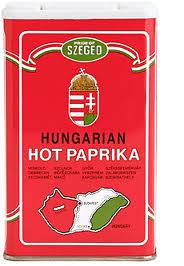