Jeff and I were chatting the other day about the concept of being a foodie. It dawned on me that at some point this term became popular and something everyone knew, even though it isn’t even in the dictionary. Where did it come from and what does it mean I wondered? Well, the exact origin is hard to pinpoint but I have my suspicions.

Foodie, from my perspective, refers to someone who is obsessed with food, cooking, shopping, restaurants and everything having to do in general with the topic of gastronomy. These are people who subscribe to cooking magazines, read articles and blogs about cooking and food, seek out restaurants before anything else when planning a vacation, enjoy grocery shopping and trying new “gourmet” items, and are always planning their next meal before they even finished the one they are consuming. I am in the purest sense of the word a foodie, and one who has been fortunate enough to make a living at it.

It seems to me that the first time I ever heard this term was about 10 or so years ago on the Food Network. I think it may be a case of the chicken and the egg. Whether the term grew out of the network or the network grew out of the term is irrelevant. The fact remains that the popularity of food shows, food magazines, reality/competition shows revolving about food, food blogs, and food radio shows has skyrocketed.

When deciding upon a new marketing angle for our bed and breakfast it dawned on me that what we have created here is a haven for foodies so I incorporated it into our website, print ads, etc. If you type in the search term “foodie” on Google, you’ll see over 13,000,000 search results. This is no small number. People who are foodies seek out other foodies to share their ideas with, meals with and ultimately to learn about the latest trends, flavors and even restaurants.

Several times over the last few months we have been told by various friends that they don’t know of any other friends who are foodies like them and would appreciate a meal at a particular restaurant for whatever reason, be it cost, extravagance, unusual cuisine, strange ingredients or even quantity. This is something I am proud of. I like being known as the person who will probably know the answer to some random food question or has the latest scoop on an ingredient or restaurant. It is my passion, my creative outlet and ultimately, it tastes darn good.

One of the greatest joys in life in my opinion is experiencing new foods and flavors. I get practically giddy when I eat something truly great. When at Robuchon’s in Las Vegas, the masterpiece of artwork that was the bread cart virtually brought a tear to my eye and the term “foodgasm” came to mind several times during a particularly memorable meal we had at Binkley’s in Cave Creek, AZ.

This is even more incredulous considering I came from a background as a ballerina who did everything she could to avoid food and had a less than ideal relationship to it. When I met Jeff, however, that all changed. His courtship revolved around introducing me to new foods and flavors and from that a beautiful marriage was born. One in the literal sense and one in the figurative sense.

Once I began working on my Master’s in Cultural Anthropology I found the topic of Food and Culture to be particularly interesting which only furthered my obsession. It always struck me that the words “You are what you eat” are not just a stupid catch phrase. They are the foundation of many of the basic tenets in our lives. We all have to eat to survive and ultimately how we fulfill this need is shaped by where and how we grew up. In this way, we are all interconnected. It is the one constant in life that sees no boundaries between race, gender, religion, economics, politics or anything else. 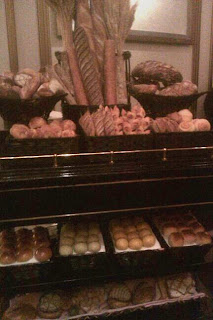 1 thought on “The Making of a Foodie”