Many of you are going to look at the title of this blog and think, ok, sour grapes. Quit whining. While there is some truth to that, I think I can back up my stance pretty easily. It’s no secret that I’ve been yearning to have my own show on any tv network focusing on Mediterranean inspired cuisine. Many of you have supported me in this endeavor, seen my pilot, came to my fundraiser to help find an agent and sent in letters to the Food Network. Over and over again upon teaching cooking classes or after appearances on Paula Sands Live! you encourage me, telling me I should have my own cooking show or I’d be great on Chopped.

Well, here is the problem. I’ve tried. I have repeatedly sent in applications to show after show after show to no avail. Apparently I am having trouble getting their attention. It doesn’t matter if I cook food that many people love or if I have natural ability to cook, teach and entertain at the same time as I often do in my cooking classes. The network execs simply don’t know I exist and are having trouble finding this needle in an ever growing haystack of would be Julia Childs.

Why?? I have a theory. Have you noticed how arrogant and nasty some of the personalities on these shows can be?? Many present an over the top persona that not only looks over the top but appears to have over the top ego. The problem is I’m too much Tinkerbell and not enough Lady Gaga. I have lofty ideas that I might be recognized for being a good chef, one who presents the kind of food that is missing on the television scene and one who is just cute, nice and down to earth. Unfortunately, while this may be the kind of person who would ultimately produce a “star,” it isn’t the kind of person who would initially get ratings on a reality competition show that thrives on conflict.

So the question is, how does someone who refuses to play the bitch get the attention of the kind of formulaic media production that is the Food Network?? How do I convince them that nice and talented are enough for ratings and in the long run will create a star that has staying power, not just a one shot wonder??

I’m not sure of the answer but I’m certainly going to keep working at it. Until then, I’ll keep doing what I do best, which is cooking with passion and passing along that passion to those who really love food, not sensationalism. Perhaps one day this passion is what will get me noticed. I may be a small fish in a big pond, but eventually even a tadpole grows up into a bullfrog and can hop onto the biggest lily pad in the pond. I’m hoping that this bullfrog will be hopping onto the Food Network lily pad sooner rather than later. 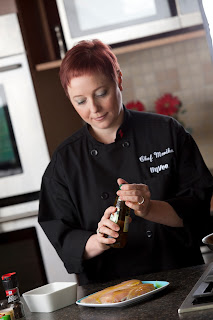